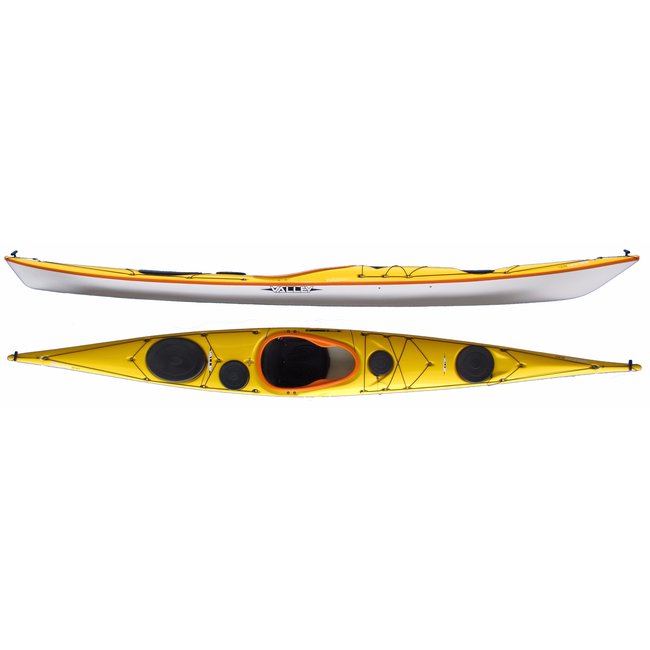 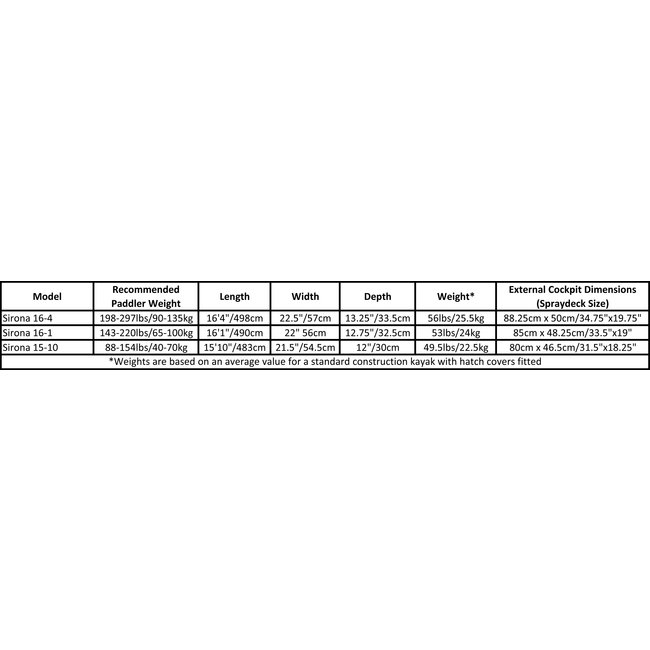 THE MODEL AVAILABLE HAS A WHITE DECK, WHITE HULL, AND BLACK TRIM. IT IS A 2016 MODEL. Read more..

THE MODEL AVAILABLE HAS A WHITE DECK, WHITE HULL, AND BLACK TRIM. IT IS A 2016 MODEL.

Summary – At around 16’ (488cm) the Sirona is short enough to be considered an Ocean play-boat but long enough to hold it’s speed, even when moderately laden. True, it is not intended for multi-week expeditions but it is certainly very suitable for most people, even those with overnight ambitions

Background – Many people still consider kayaks around this length (approx. 16’/488cm) to be the “gateway” length for proper sea kayaks and whilst we don’t rigidly subscribe to that view, certainly it is a length that allows comfortable multiday trips to be undertaken. The reason is simple, physics! The shorter a kayak is, all other things being equal, the more it will be affected by variations in load. This is because the smaller the footprint, the more it needs to sink into the water, to support a given displacement. So, at 12’ a rec-tourer might sink a further 2” (50mm), when carrying the extra kit required to camp overnight. Yet, in a proper 16’ sea kayak, the effect might be less than half this. The result is obvious, as the amount of hull in the water changes, so does the feel of the kayak, go beyond, what the designers intended and performance become seriously compromised.
Anyway, lesson over, this class of kayak is a great length for those who want a bit of everything, still short enough to be easily maneuvered, on or off the water but long enough, to have the speed to keep pace in any group and carry a load when required!

Design – When launched in 2015 the Sirona was an instant hit. Most testers commenting that it retained the versatility of its predecessor, the Avocet but also noting that it possessed a more playful personality reminiscent of the earlier Pintail.
Despite its playful personality, its sixteen-foot hull is one of the fastest in its class, whilst the hull also responds predictably to edging and has a stability profile that allows even newer paddlers to exploit this.
Although not conceived as a long-range expedition kayak, the Sirona is not limited to mere day-boat duties, it being more than capable of multi-day adventures, the hull speed again being of benefit, allowing a Sirona paddler to keep pace in any group, good seat ergonomics provides all day comfort and the predictable handling easily absorbs variations in load.
The Sirona is truly a kayak to enjoy at any level of ability and one that your skills will never outgrow!

Conclusion - .Of course, longer kayaks will ultimately have more maximum hull-speed but this advantage only appears at speeds above those of regular group paddling. Equally a full expedition kayak will more easily accommodate a heavy payload. However be realistic, if, like most people, your paddling consists of regular social day paddles, the odd overnighter and only the very rare possibility of anything longer. Then you might enjoy your paddling more in a Sirona